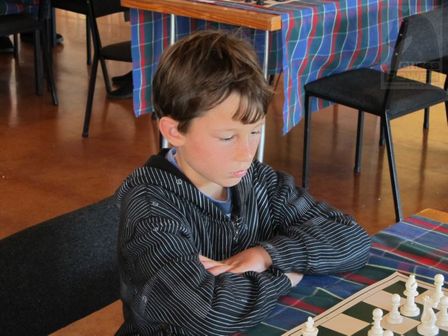 A new venue and a new challenge. The MC Cup moves from strength to strength.

Summary of the days events

We would like to make a special thank you to Trevor Duffy and the Milford Bowling Club committee members for offering their wonderful venue to host this event.

Numbers were down slightly from last months cup, with 18 players competing in this event. However, we are confident the numbers will increase given the improved venue and general quality of the event.

The tournament favourite for the day was William Zhang, who won the MC Cup the previous month. The event included good representation from Riverhead School with no less than 6 players competing and Milford Primary with 5 players entered. One adult entered the event this time around, Rushir Nairyani and was considered a dark horse with little known about him or his level of Chess.

There was only one girl this time around with Ellie Brown from Riverhead. Ellie has recently had less involvement in Chess so it is great to see her take strong interest again and compete. As the only girl, she is guaranteed the Best Girl prize!

The day started with a tough match up from the outset with Alphaeus Ang playing the White pieces against the strong Jack Julian from Milford. Alphaeus' extensive tournament experience paid off and he came through this game with confidence.

Michael Slessor-White from Milford was on the White side against Rushir Nairyani. Michael wasn't able to hold and we soon learned Rushir is a useful player.

In Round 2, Gian Krauer was given the Black pieces against William Zhang. This was a good test for Gian who has moved from strength to strength in recent performances. In the end though William showed he was already eyeing the trophy.

Callum Batley was the only player from Huapai and couldn't hold against Alphaeus' attack. Rushir continued showing strength winning against Michael McKenzie from Helensville. And Kurt Brown from Riverhead had a good win against Ruben Cirilovic from Milford.

In Round 3, Alphaeus pulled out a great win against Rushir to stop him in his tracks. And William continued his winning form, pushing Allen Fan aside.

Round 4 and the two leaders, Alphaeus Ang faces his arch-nemesis William Zhang. Alphaeus is desparate to even the score after losing to William in the last MC Cup. But alas it isn't to be as William proves his strength again winning the game in fine style.