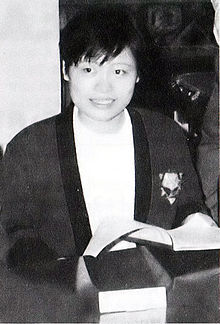 At the age of six Xie began to play Chinese chess, and by the age of 10 she had become the girls' Xiangqi  champion of Beijing. At the urging of government authorities, she soon began playing international chess. Despite indifferent training opportunities, Xie became the Chinese girls' chess champion in 1984. In 1988 she tied for second–fourth places at the women's world junior championship.

At the age of 20 Xie won the right to challenge for the women's world title, and in 1991 she defeated Maya Chiburdanidze of Georgia, who had held the title since 1978, by a score of 8½–6½. In 1993 she successfully defended her title against Nana Ioseliani (winning the match 8½–2½). She lost the title to Susan Polgar of Hungary in 1996 (8½–4½) but regained the title in 1999 by defeating another championship finalist, Alisa Galliamova (8½–6½), after Polgar refused to accept match conditions and forfeited her title.[4] In 2000, FIDE changed the format of the world championship to a knock-out system, and Xie won the title again, beating fellow Chinese player Qin Kanying 2½–1½ in the final.

A hero in China, Xie became widely known for her optimism and vivid attacking style. Her success did much to popularize international chess in her country and the rest of Asia. Xie Jun proved to be the first of a number of strong Chinese women players, the others being Zhu Chen, Xu Yuhua, and Wang Lei. She was also an important factor in the Chinese women's team winning the gold medal at the 1998 Chess Olympiad in Elista in Kalmykia, Russia.

Among women, Xie has been the number 2 or number 3 highest rated woman for much of her career. Judit Polgár, the top-ranked woman, does not play women-only chess events.

Around the end of the 1990s, Xie was reading for a doctorate in psychology at Beijing Normal University. Xie Jun now spends most of her present time working as an official at the Beijing Sports Commission, taking care of chess players and other sports people.

In July 2004, she gained the titles of International Arbiter and FIDE Senior Trainer.